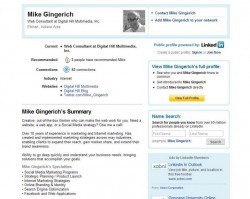 LinkedIn is the largest professional social network, with 50 million members around the world who post information about themselves, such as resumes, to help find jobs or employees, and to stay in touch with each other.

Twitter allows people to broadcast short messages up to 140 characters to subscribers, who are called “followers.”

LinkedIn also has an update box, which happens to be 140 characters.

o-founder of Twitter who is its vice president of product strategy, said LinkedIn members would be able to automatically post recent Tweets if they wanted.

Blue said users will have the option of sending only selected materials to Twitter.

He said that in addition to the obvious advantage of increasing the audience for either tweets or LinkedIn information there were two other advantages to the new system.

Twitter “wants to take advantage of the strong identity in LinkedIn to make those professional tweeters more successful.” While anyone may sign up for a Twitter account without revealing their real identity, LinkedIn is based on the social networking idea that people put their identities on the Web.

Second, LinkedIn users who cross-post will be speaking both to their followers and to the broader Twitter audience that searches for tweets by keywords, location, user and the most current, Blue said.

Both companies are privately held.