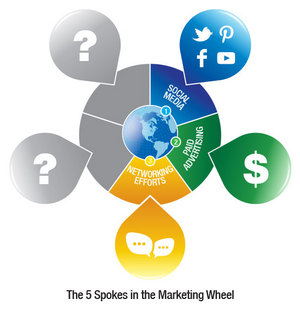 Marketing is much like a wheel in the sense that your website is the “hub”, and all of your other marketing venues are “spokes” pointing back to that hub. So far, we have looked at Social Media as Spoke #1. Today we will be looking at Spoke #3: Networking Efforts.

How many people do you have in your network? Do you know what “good” networking connections look like? How much time should you spend networking a month? How does networking and your website relate to each other? All of these questions together equal a successful networking campaign for your business. Let’s examine each question individually:

Just because you paid for a Chamber of Commerce membership, or a spot at the local BNI networking group table, doesn’t mean you have a networking campaign in force for your business. There are so many pieces to this puzzle that most don’t think about:

A.      Is this networking group worth your time?

B.      Are their viable “revenue generating” contacts in this group?

C.      Is this group known for producing leads, or business?

D.      If you send leads to this groups members, can they be trusted? DO they have good reputations?

After you get the answers to these questions, you then need to make a commitment to the group. Showing up twice a year isn’t going to develop the kind of relationships that are formed when trust is built. You must develop friends that are also clients. People don’t recommend people who they don’t trust.

2.       How much time should you spend networking per month?

It’s usually not good to answer a question with a question, but how much money do you want to make through your networking efforts? The return on investment is proportional to the time invested! You need to be doing some type of networking EVERY week. Chamber of Commerce, The Lion’s Club, The Rotary Club…most communities have several options on getting involved and networking with local businesses.

3.       How does your networking efforts and your website relate?

If you are going to take the time to build these relationships, you need to have a great “hub” to send people to learn more about you. You might make an EXCELLENT first impression, but at the end of the night, most people are going to look to the web to research you and see what you are all about. A terrible web presence is a terrible second impression. Make certain that as you meet all of these new people, you are giving them a spectacular website to look at, and to send possible leads to. Also, don’t neglect networking websites that allow you to cement the relationships you start through face to face networking, like LinkedIn. This site is vital in following up, communicating offers, and in requesting introductions from people who you know who may know other business owners who you may not know.

In the end, you also need to remember that networking is a two way street. You can’t expect to gain hundreds of leads, and not give any. Your time invested will pay off not just in revenue generating possibilities, but also life-long contacts and hopefully friends.