The Rule of 1, 3 and 7 in Internet Marketing & Website Design

The Rule of 1, 3 and 7 in Internet Marketing & Website Design

Every website and internet marketing campaign should have one major measureable goal.  Once this goal is defined a strategy can be developed and tactics can be deployed.  The key to this goal is the word measurable.  Sometimes, when I take on a new client, they begin by telling me how they want an “informational” website only.  For starters, all websites are informational, and second, informational is not a measurable goal.

It takes a measurable goal to correctly determine ROI.  An example of a measurable goal for a non-ecommerce website might be to grow the email data base by 50% over the next six months, or to increase the number of web-tracked phone calls by 75% in the next quarter.

If your goal is measurable then the Rule of 1 applies.  The biggest boldest callout on the whole website should be some form of email capture or web-tracked phone number based call to action.  This could be done via a robust Contact Us, UVP, moral bribe or portal strategy.  Otherwise, you’re just hoping your website visitor is compelled enough by your content to look for your contact us link, click on it, and fill out your form. 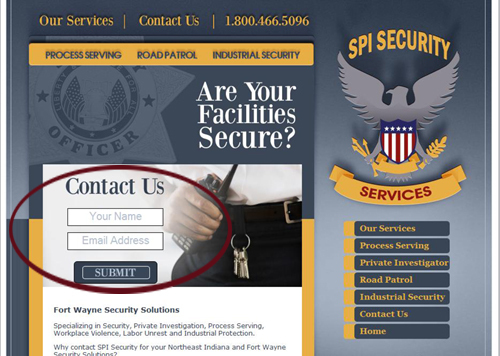 This rule is comonly utilized as a segmentation best practice in internet marketing.  Segmentation strategies using the Rule of 3 clearly highlight three specific paths that a visitor can take that will help that visitor solve a problem.  More than three paths can be presented, but the callouts should be clearly grouped in threes or less and be cleary separate from the other groups.

Below is an example of the Rule of 3 and the Rule of 1 on the same website.  You’ll notice there are 5 destinct major paths a visitor can take.  The first three, Laser, Optical and GPS represent segmentation to convert a visit into a sale.  The other two callouts are for lead capture and survey equipment services which are secondary goals.  Therefore, they are cleary separate from the three major segmentation paths.  This was done utilizing design, color and shape differences. 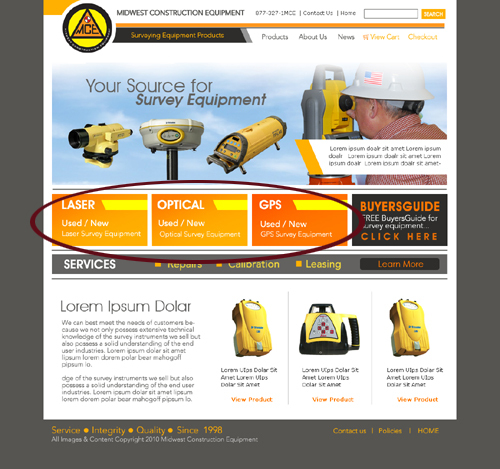 Ever wonder why phone numbers have seven numbers?  It’s because the average human mind can remember, handle and digest up to seven numbers at once.  This same idea holds true for websites and throughout internet marketing.  Never present a visitor with more then seven callouts or links of equal weight to sort through.  Your site will suffer from poor click-through rates because visitors don’t have the patience to sort through all of the information you’re trying to present them with.  You can present more then seven paths but they must be cleary presented in groups of no more then seven.  This can be done utilizing headings, design, color and shape differences.